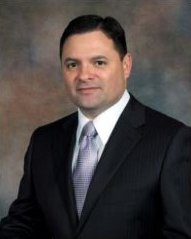 Jose C. Rodriguez III is the Regional Commander for the Texas Department of Public Safety in Region 3 Weslaco.

The Commander oversees and coordinates all regional functions to further the DPS mission of “Protect and Serve Texas”.

Region 3 Weslaco is composed of over 1,000 employees and encompasses 27 counties in south Texas.

Commander Rodriguez began his career with the Texas Department of Public Safety on October 18, 1988 as a State Trooper stationed in Three Rivers.

He has held numerous positions and has been stationed throughout the state including Kingsville, El Paso, Corpus Christi, McAllen and now presently in the Weslaco Regional Office.

In 2009, the Department reorganized and strengthened its regional command structure, establishing seven DPS Regions across the state.

On October 1, 2009, Rodriguez was appointed to the newly created Regional Commander position in McAllen.

A native of Kingsville, Commander Rodriguez has a bachelor of Business Administration from Texas A&M University – Kingsville. He is also a graduate of Northwestern University School of Police Staff and Command.

Commander Rodriguez is married to Velisa and has a daughter, Lauren and a son, Jadan.

Please note if you RSVP after Tuesday, July 7 at noon there will be a $5 fee accessed due to new Prestonwood Country Club policies & charges.